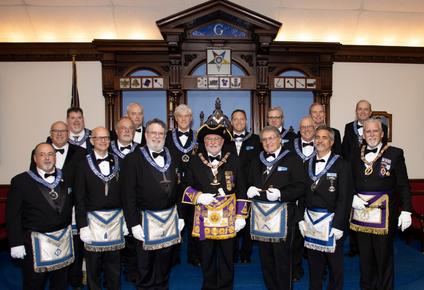 The Grand Master of Masons in Massachusetts

History of William Parkman Lodge
(Strengthened by Simonds Lodge in 2019)​

​William Parkman Lodge, Ancient Free & Accepted Masons, is the oldest service organization in the Town of Winchester, Massachusetts – with a proud history of serving Winchester, Woburn, and other surrounding communities for 160 years.   With more than 110 Masonic Brothers as members, we constantly strive to meet our Mission:  “Service to our community will be plentiful and will prove rewarding for both the Brothers and non-Masons alike.”  We are one of the nine Masonic Lodges that constitute the 13th Masonic District of Massachusetts.

The Lodge had its beginning on a winter evening in January 1864 when Abijah Thompson, III, owner of the tannery on what is now Manchester Field, invited Dr. William Ingalls, David Skillings, Josiah Stone, and Albion Joy to his home on Walnut Street to discuss the formation of a Lodge in Winchester by those who were already a member of the Craft.  A temporary dispensation permitted the Lodge to begin its work shortly thereafter.

The membership grew so quickly that the Grand Master of Masons at that time, Most Worshipful William Parkman, granted a charter on June 14, 1865, to the burgeoning Lodge and graciously allowed the use of his name for its title.  As a result, Master Albion K. P. Joy became the first Master of William Parkman Lodge.  The Lodge honors the legacy of its namesake by visiting each spring his gravesite in Mount Auburn Cemetery in Cambridge, Massachusetts, around the time of his birthday.

Through the years, William Parkman Lodge has conducted its monthly meetings in three locations.  From its formation in 1864 until 1939, the Lodge met in the Lyceum Building on Mount Vernon Street in Winchester Center.  Just in time for the Lodge’s 75th anniversary, the Lodge moved to the Hevey Building at the corner of Mount Vernon and Main Streets.  Finally, in 1975, the Lodge moved to its current location on Arlington Road in Woburn – a short distance from the Winchester town line – where the Lodge shares apartments with other Masonic Lodges and appended Masonic bodies.

There have been many notable celebrations over the years – generally falling on significant anniversaries in the Lodge’s history.  The first recorded celebration occurred in 1914 when the Lodge was 50 years old – followed by the 75th anniversary gathering in 1939, the 100th in 1964, the 125th in 1989, and, most recently, the 150th in 2014.  This celebration took place in Boston at the Grand Lodge of Masons in Massachusetts and was attended by many current members of the Lodge, other Lodges in the Commonwealth, and numerous dignitaries from the Craft.

Through the leadership of 101 Worshipful Masters and thousands of other officers & committee members over the past 160 years, William Parkman Lodge has proudly served Winchester, Woburn, & Burlington with many philanthropic endeavors.  The Lodge is an active supporter of the Masonic Hospital Loan Equipment Loan Program (“HELP”) which lends – free of charge – hospital supplies (e.g., beds, wheelchairs & walkers) to those in need.  In addition, the Lodge hosts Masonic Youth Child Identification Programs (“MYChIP”), and sponsors teams in both youth baseball & adult softball leagues.  Also, the Lodge organizes Blood Drives each year (in conjunction with the American Red Cross) and proudly visits any Masons or their family members who are hospitalized in any of the Beth Israel Lahey Health medical facilities (including Winchester Hospital).  And the outreach is not confined to only our local area:  The Lodge and its members have been generous contributors to our Masonic Brothers who have been adversely impacted by the natural disasters that recently ravaged Kentucky, Texas, Florida, and Puerto Rico.

Numerous Brethren have proudly served in the Armed Forces in many foreign conflicts over the years – including the Civil War, both World Wars, the Vietnam War and the Middle East.  Duty to our country is a basic tenet of Freemasonry.   In addition, Brethren have played impactful roles in the Towns of Winchester & Burlington as business leaders, government employees & officials, and community volunteers.

Other recent accomplishments include receiving the coveted Grand Master’s Award for six consecutive years.  These awards are the result of the sincere and heartfelt efforts of many Brethren to fulfill their Masonic obligations to the Lodge, the District, and the community.

This rich tradition of community service and Brotherly support continues today under the leadership of Worshipful David Paul Jackson and his line of officers – and will continue as other Brothers move into impactful roles over the coming years.  We are always looking for men of similar sound character to join us in this journey to better ourselves and to serve our local communities.  ​​

On behalf of the Master, Antonio Aufiero, William Parkman Lodge extends a Fraternal Greeting to our Brothers as well as a sincere greeting to all non-masons viewing this site.

Our lodge meets on the second Tuesday of the Month from September to June.  There are no meetings in July and August.  If you have any questions or would like more information about William Parkman Lodge please click here "contact us."  Please take a moment to read the "History of William Parkman below.   Thank you.